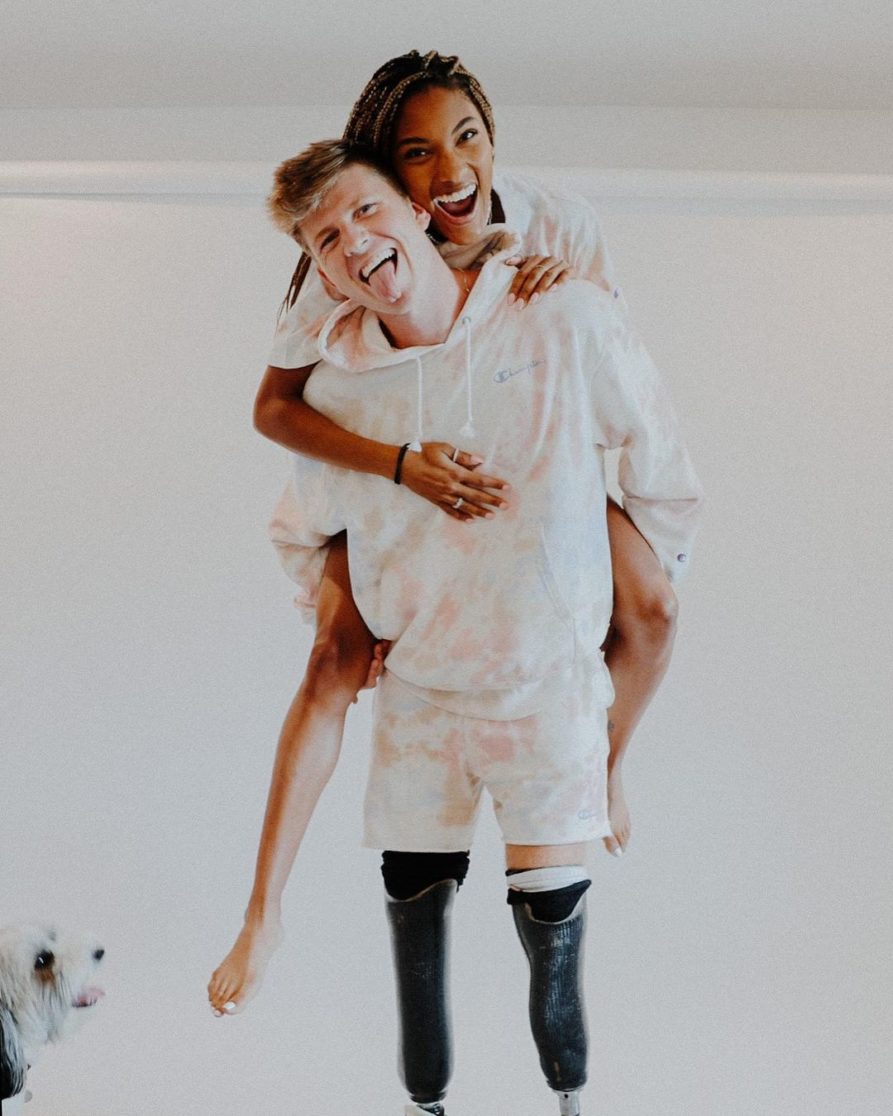 STORY by Team at Archewell

Track Brought Tara Davis and Hunter Woodhall to Each Other — and to Tokyo 2020.

This summer, when NCAA long jumper Tara Davis qualified for the Olympics at the U.S. Track and Field Trials, her much-viewed celebration with boyfriend Hunter Woodhall sent smiles around the world. Woodhall, a silver and bronze Paralympic medalist, is also heading to Tokyo, and the sight of the pair reveling in each other’s success was a reminder of the joy to be found in sports.

This weekend, Davis competes in the Olympic Women’s Long Jump, and next month, Woodhall will run in the Paralympic 400 and 100-Meter Dash. Before they left for Tokyo, the couple — who met at a high school track meet — sat down with Archewell to discuss how they’re supporting each other and advice they have for competing at the highest level. “I want people to know we’re just two normal people,” Woodhall explains. “We bring a lot of diversity into our relationship, and we want to be really transparent about that. Tara is a woman of color. I have a disability. We want people to know that whoever you are, whatever situation you’re in: it’s okay and that’s what makes you special and unique. Be proud of yourself and go chase your dream. We’re living proof that if you put your mind to it and put in the work, crazy, wild things can happen.”

Congratulations on making it to the 2020 Olympic Games! How do you both feel?

Hunter: I’m most excited that we’ll be there together. This will be my second Games, but to be able to share it with the person I’m closest with in the entire world is really, really special. At the Rio Olympics in 2016, I had a team supporting me and cheering me on. Now I get to be that person for Tara. It’s super exciting. It’s your first Games, Tara!

Tara: It’s mind-boggling! It’s been a dream for so long, and now it’s a reality. I just have to focus and treat it like another meet.

What drew you to sports?

Tara: I started playing sports when I was four years old. My dad had a track team and I was just thrown into it; I fell in love with track and long jump. I’m a competitive person and with track, I get to compete against myself. I get to keep pushing myself. It just felt — and still feels — right.

Hunter: I’m the exact opposite. At the beginning, I was always the kid getting carried in sports. I lost my legs when I was 11 months old, and shortly after, got my first pair of prosthetics. Finding track was the first time that, despite the challenges, I felt like I had total control over what I was doing. It was up to me to decide how I was running. A coach couldn’t put me on the bench because I didn’t have any legs, or whatever the bias was. I really fell in love with the ability to control what happened in my own life for the first time. I fell in love with the idea of being able to succeed when so much of the world thought I wouldn’t. It became somewhat of a high I was chasing: continuing to get better.

How do you motivate yourselves and each other?

Hunter: In hard times, we bounce off each other a lot because we can get on the same level and understand what the other is going through. We use each other as a life raft.

Tara: We really do. It’s amazing to have someone who cares about the same things that you do.

Hunter: Also, the team behind you. When you have people in your life that are putting a vote of confidence in you and pushing you to be better, it motivates you. I want to prove these people right.

Tara: And goals. I look at my goals every single day. Being able to cross off one goal makes me eager to cross off all of them.

Hunter: We just looked at Tara’s goal board, actually. These are not small goals. They’re getting huge personal bests, winning national titles, breaking records, making the Olympic team. All but one goal was crossed off, and that one was her own choice. Every other one was attained. Her power is crazy.

What about track in particular brings you joy?

Tara:  It’s an individualized sport, so you get to focus on yourself. I push myself to my limit and I don’t have to rely on someone else to put in the work. I love learning and understanding how far I can jump and how fast I can run.

Hunter: I also think there’s a rawness to track and field. It’s you against the clock, or you against the measuring tape, and that’s it. There are no excuses. There’s something unfiltered and powerful about that.

Have you found community through track?

Tara: Easily. The track community is small. You’re with these people for so long, and you create bonds for a lifetime. You have such a short amount of time to compete that you get a lot of time to meet people who you eventually cheer on. Everyone enjoys everyone. After we compete, we’re all friends.

Hunter: The team you build around yourself is so important. Our team, our trainers, our coaches, our partners, each other. When you’re in a sport, it’s one of the most vulnerable places you can be, and to be able to share that and experience it with other people is a deep and amazing connection. Track is worldwide and international, so you get to meet amazing people from all over the globe. It really brings people together across difference.

Track is worldwide and international, so you get to meet amazing people from all over the globe. It really brings people together across difference.
Hunter Woodhall
Where have you seen compassion in the world of track and field?

Hunter: Track has so many stories where you see people pick up a competitor when they fall. There’s a sense of competitiveness, but also a sense of humanity behind it. At the trials in June, Allyson Felix — one of the most decorated track and field athletes — was there taking photos with Tara. It’s really cool that someone like that takes time out of their day to be in the moment with a person as they’re experiencing success.

Tara: I really think track and field is one of the nicest sports.

Do you have any advice for anyone who wants to compete at this level?

Hunter: Whatever it is that you want to do, just start. We often see the end goal; we see Olympians. But you have to start somewhere.  I started from nothing. Tara started when she was 4 years old and there was absolutely no guarantee she was going to the Olympics. We just loved it enough to keep going.  If you’re doing something because you’re looking for a result, it probably won’t come. But if you’re doing something because you generally love and enjoy it, then a lot of times, the results will come. We’re all human. We’re all different. It doesn’t always have to be about winning. A lot of times the biggest wins for us are personal. If you’re achieving your own little goals, that’s success.

Tara: And make sure you’re always having fun while doing it. There are difficult moments, but if you’re having fun, it’s all worth it.

Hunter: Plus, when you become an Olympic champion, it’ll be a lot more fun!